Gratitude for Things Taken for Granted

9 The LORD said to Joshua, “Today I have rolled away from you the disgrace of Egypt.” And so that place is called Gilgal to this day.

10 While the Israelites were camped in Gilgal they kept the Passover in the evening on the fourteenth day of the month in the plains of Jericho. 11 On the day after the Passover, on that very day, they ate the produce of the land, unleavened cakes and parched grain.

Background
This chapter includes mention of the ritual of circumcision as well as a scene featuring a vision for Joseph. In chapter 4, we see a story about the twelve stones set up at Gilgal as a reminder of the struggle of the ancestors. (Remember Pastor Simpson’s sermon series with the bricks?)
In your own devotional period, read chapters 4 and 5. What kind of community is this? How would you describe it?

Today’s lesson will focus on gratitude for the things we often take for granted.

What is the significance of eating from the land?
At some point in the wilderness (Exodus 16) God sends the people manna and quail. At this point in Joshua, before the Israelites settle permanently, only manna is mentioned. From this passage, it appears that the people relied heavily on manna for a very long time. Maybe as a treat they might have stumbled across wild animals or sweet wild berries, but for the most part, the people were not living in a stable enough environment to have crops and cattle.
When you can eat from the land, it means you are stable enough to farm. Labor, weather, and irrigation must cooperate in order to feed entire communities. Think of all the municipal services we have here in Brooklyn. Waste management, water treatment, roads, commerce, power plants. There are so many things that make a community stable, and the Israelites are finally able to taste it for themselves.
But as Professor Samuel Giere of Wartburg Seminary asks, “crops planted by whose hand? By whose labor?” Who makes dinner possible? The passage does not tell us much. But we do know that other people already inhabited the land of Canaan. Which makes us wonder– Why would God promise land to one oppressed group that belonged to another?

What disgrace followed from Egypt?
This passage begins with God saying to the leader, “today, I have rolled away the disgrace of Egypt.” We get a clue that the people are beginning to form a distinct identity that honors their historic struggle– the people are celebrating Passover! Passover is the holiday that commemorates God sparing the Israelites from the plagues visited upon Egypt.
But the people are also not freshly out of Egypt. It has been about 40 years of wandering (ten U.S. presidential terms!) There are children in this community who do not know what Egypt was like. There are elders who are charged with telling the story and reminding them through the remembrance of seasons like Passover. The land now provides for the people, where before, the people depended on manna. 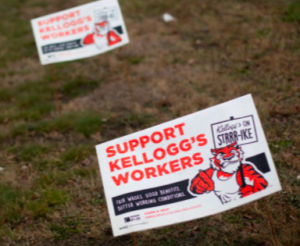 1,400 workers from Kellogg factories went on strike on October 5 when their contract expired. The catalyst was a horrifying set of negotiations about payment and benefits, especially during the pandemic. Workers cite human rights violations, including hard hours and dangerous working conditions. Even more, Kellogg’s had taken away necessities like health care, holiday and vacation pay and retirement benefits. Some employees were forced to work 12 to 16 hour shifts without overtime pay, all while being expected to keep up with production.
During the strike, Kellogg’s hired replacement workers to keep up with quotas. Striking workers advised people not to buy from Kellogg’s primarily out of solidarity, but also out of safety. New workers also mean people are not as technically skilled or as knowledgeable about health standards.
In our country, we are supported by so many invisible laborers. Nothing that we have is made out of thin air. When we sit at the table and eat breakfast, let us say “thank you” to all those who coordinated to make the meal happen. And then, let us take action to support the safety and dignity of all workers.

Journal: Think of your daily routine. What activities do you take for granted that would be devastating if you could not have them? Who is responsible for the simple luxuries you might enjoy today?

Prayer:
Dear God,
We thank you for the water that runs through our pipes, the fruit on our counters and the electricity that powers our cell phones. The coordination of all these elements and more is an astounding miracle.
Even as the pandemic rages on, we ask a special blessing for the labor that is invisible to us. Help us to be mindful about all the industries that make our lives a little bit easier. All of us benefit when all workers can have dignity.
Today, show us to be thankful for what is. Though we may not have all the things we want and need, may we take inventory of the things in our hands we do have. In Jesus’ name we pray, Amen. 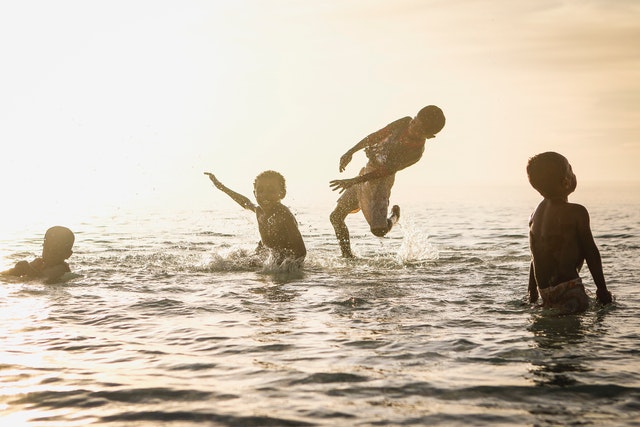 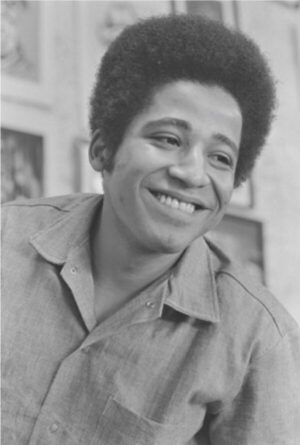